Watch below the PSA video Jessica did with 90210 co-star Matt Lanter for the 4th Annual Teens For Jeans.

Jessica and her 90210 co-star Matt Lanter have been announced as the faces of the “Teen For Jeans” 2011 campaign. Check out an article below from ET Canada!

“90210” beauty Jessica Lowndes and her hunky co-star, Matt Lanter, have been announced as the faces of the 4th annual Teens For Jeans campaign.

The initiative will enlist the help of hundreds of thousands of teens to take action on youth homelessness.

To kick this year’s drive off, teen retailer Aéropostale has promised to donate 10,000 pairs of brand new jeans.

Teens across the US and Canada will be called upon to donate gently-used jeans to the good cause, which will go directly to local shelters in their communities.

The TV stars have joined together to create a Public Service Announcement to challenge teens to help surpass the one million mark during the three week campaign.

The PSA will launch on TeensforJeans.com on Monday, Jan. 17.

Jessica donated one of her dresses for charity at Clothes Off Our Back. Opening bid is $100.00 and it ends on September 27th, 2010. 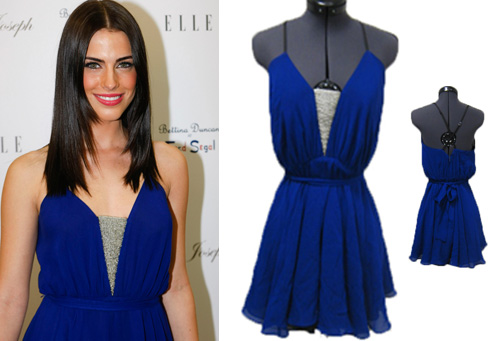 Bid now on the blue dress that actress Jessica Lowndes wore to the Bettina Duncan Boutique launch for Joseph’s holiday collection on December 12, 2009, in Santa Monica, California. The dress has a silver accent in the front, a tie belt and criss-cross straps.  Ms Lowndes (“90210”) donated the dress to support charity.

Proceeds from the auction benefit the National MS Society and Clothes Off Our Back’s charities including Feeding America, Malaria No More, Hope North, AbilityFirst, Villa Esperanza and Alex’s Lemonade Stand.

More information at Clothes Off Our Back