Here’s the synopsis for the 90210’s episode 2×18 – Another Another Chance. Do not read below if you don’t want spoilers.

NAOMI IS FORCED TO TESTIFY DURING HER SEXUAL HARASSMENT HEARING, SCOTT PATTERSON GUEST STARS — Naomi’s (AnnaLynne McCord) little white lie has become the talk of the school, and when she is forced to testify in front of the school board, she drops a bomb that no one saw coming. Annie (Shenae Grimes) is finally able to put her relationship with Jasper (Zach Sherman, who does not appear in the episode) behind her, but when she and Silver (Jessica Stroup) inadvertently drive past the scene of her hit-and-run, the guilt comes rushing back to haunt her. Dixon (Tristan Wilds) and Ivy’s (Gillian Zinser) fake-dating situation continues and the two make a decision that neither one anticipated. Adrianna (Jessica Lowndes) and Navid (Michael Steger) share a friendly conversation which doesn’t go over well with their significant others, Gia (guest star Rumer Willis) and Lila (guest star Amber Wallace). An argument between Gia and Adrianna results in Adrianna walking in on Gia and her ex-girlfriend. Liam receives a surprise visit from his father, Finn (guest star Scott Patterson, “Gilmore Girls”), just released from prison. Though Ivy has warned Ryan (Ryan Eggold) that her mother is trouble, he continues to date Laurel (guest star Kelly Lynch). Rob Estes and Lori Loughlin also star. Millicent Shelton directed the episode written by Scott Weinger (#218).

Here’s a little quote from Jessica at “The Things They Say” on Hollywood.com!

“My ultimate dream is musical theatre, maybe in London. That would be amazing.” 90210 star JESSICA LOWNDES is eyeing a career change.

There’s a new spoiler for 90210 from WWK. Do not read below if you don’t want spoilers!

Mart223: Thanks for the cool plug for 90210! How about some more scoop to celebrate?
I give and I give and…well, you give in return, so OK. Gia is going to cheat on Adriana, and Naomi accuses a teacher of sexual harassment, but it’s so not true. Also, things get even creepier (and life-or-deathier) with Jasper. Dun. Dun. Dun.

Embarrassing Confession: We Kinda Love 90210 These Days…and What’s Next Will Blow You Away!

Would you think less of me if I told you that the best TV screeners I’ve seen all month were for the upcoming episodes of the CW’s 90210?

If so, pretend I’m talking about Lost or The Office or something, and try to read on even if you’re not a fan, ’cause although 90210 got off to a slow start, it is kicking some serious (Brazilian butt-lifted) gluteous maximus in its current second season. And it’s only getting better.

Wanna know why you should consider watching again if you haven’t been, and what lies ahead if you’re already a fan?

Jessica Lowndes Sings! Let’s be honest, when audiences were introduced to Adrianna in the 90210 premiere, we were left with a little more than something to be desired. Flash-forward to the middle of season two, and Ade (and Jessica!) have captured our hearts and ears! The girl can certainly belt one out, and we’ll be hearing a lot more of her vocals in coming episodes. In fact, it’s her soon to be ladylove, Gia (Rumer Willis), who convinces her to share her gift with the world—or at the very least, West Beverly High.

But watch out, because her days in the chick band won’t be as carefree as they initially seem. Turns out one of the members is now dating Navid (cute new coupling alert!), and Ade isn’t as over him as she’d like to think. Enter Gia with her declaration of love, and all turns out well. Spoiler Alert! Navid’s new GF is someone we have seen many times before around the 90210 set, just not one of the regulars. Any guesses?

Read the full article at E!Online

Here’s the synopsis for the 90210 episode 2×17 – Sweaty Palms and Weak Knees. Do not read below if you don’t want spoilers!

ADRIANNA AND GIA TAKE THEIR RELATIONSHIP PUBLIC — Annie (Shenae Grimes) deals with the outcome of Jasper’s (Zach Sherman) decision to jump from the Hollywood sign and begins to find some peace with her situation. Silver (Jessica Stroup) and Teddy (Trevor Donovan) decide to double date with Liam (Matt Lanter) and Naomi (AnnaLynne McCord), which makes Dixon (Tristan Wilds) and Ivy (Gillian Zinser) feel left out, so the two decide to fake date. Adrianna (Jessica Lowndes) and her band perform for the first time at the Beach Club and, with her newfound confidence, Adrianna decides to make her relationship with Gia (Rumer Willis) official in a very public way. Liam encourages Naomi to come forward with her sexual harassment case, which causes her to continue her lie. Rob Estes, Lori Loughlin, Michael Steger and Ryan Eggold also star. Krishna Rao directed the episode written by Ben Dougan (#217).

There is an interview from CW Source with Jessica. She talks about her 90210 character Adrianna, the relationship and the kiss with Gia (Rumer Willis), how the relationship will develop and more. You can watch the video below. Also, there are 250+ HQ screencaptures from the interview in our gallery! Enjoy the update!

Here there is an interview from TorontoSun: Jessica talks her character Adrianna in the CW’s 90210 and the relationship with Gia. Read below!

“Adrianna has a very addictive personality, addicted to the highs and the lows,” said Lowndes, 21. “In the episode just before the break, she made a commitment to quit drugs and try to stay on the straight and narrow.

“She still has feelings for Navid (played by Michael Steger) and she’s doing everything possible to prove her love for him. So she goes to AA and meets this girl named Gia, played by Rumer Willis.

“Through different compromising situations that Adrianna finds herself in, Gia is really there for her and they share a special bond. Adrianna starts truly questioning her sexuality. So that’s definitely going to be something.”

“Gia encourages Adrianna to take her sadness over Navid and put it into music, which has been amazing for me,” said Lowndes, who is embarking upon a music career herself. “I’ve been able to incorporate a lot of music into the show.”

“It’s so exciting, and all different musical styles, as well,” Lowndes said. “It’s awesome that we got a third-season pickup and there’s going to be a lot more music in the third season as well.

Despite being part of the quintessential California lifestyle in 90210, Lowndes said Vancouver always will be home. She did make it back to Vancouver for the tail end of the Olympics.

“I went to the closing ceremonies and different medal ceremonies and hung out with my family, it was amazing,” Lowndes said. “Just taking in that Olympic spirit, I’ve never seen the streets of Vancouver like that.”

Read the full article at TorontoSun

NAOMI DECLARES WAR AGAINST A NEW FACULTY ADVISER AND CLAIMS SEXUAL HARASSMENT – Naomi (AnnaLynne McCord) immediately butts heads with the Blaze’s new faculty advisor, Mr. Cannon (guest star Hal Ozban, “Californication”), and is reprimanded in front of her peers. After failing to convince Navid (Michael Steger) to back her opinion, Naomi decides to tell a tiny lie that soon snowballs out of control. Adrianna (Jessica Lowndes) is now the lead singer of the Glorious Steinems and confides in Silver (Jessica Stroup) and Naomi about her newfound feelings for Gia, and the two go out on their first official date. Teddy (Trevor Donovan) decides to test Silver (Jessica Stroup) by attempting to make her jealous. Dixon (Tristan Wilds) and his birthmother Dana (guest star April Parker Jones, “Jericho”) continue to bond. Liam (Matt Lanter) catches his stepfather (guest star John Schneider, “Smallville”) with another woman and confronts him with his fist. Debbie (Lori Loughlin) and her instructor, Kai (guest star Greg Vaughan, “General Hospital”) share tea and conversation after yoga, but Kai oversteps his boundaries. Shenae Grimes also stars. Stuart Gillard directed the episode written by Tod Himmel (#216). 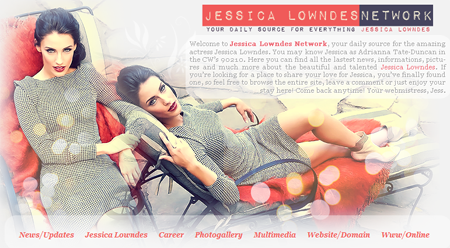 As you can see, I’ve made a new layout for the main site with these amazing pics (thanks to Jessica Lowndes Online for them). I’m going to change the layout gallery soon and I’ll add many HQ pictures in the next days!

Hi! I’m Jessica and I’m the new owner of this site, jessicalowndes.net! I’m going to fix all in the site and adding many new contents! In the next days I’ll put online a new layout created by me for the site and I’ll start to replace the current pictures in the gallery with new and HQ ones! For now, just wait 3 or 4 days and you’ll hear me with a lot of news! Stay tuned and come back here in some days!